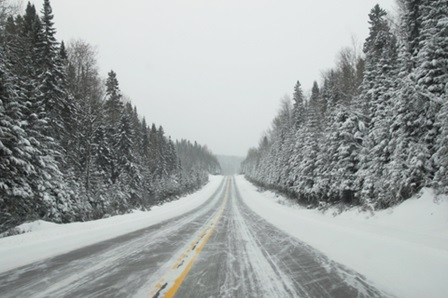 An article came to my attention today describing the variety of ways the use of salt and other chemicals on roadways in the winter impacts the roads themselves, bridges, cars, land-based wildlife, and of course…water quality. All the runoff from all the paved roadways across our country flows into roadside ditches, stormwater pipes, infiltrates into the soil and groundwater, and/or flows directly into the streams and rivers themselves. This is not new information. A quick google search on the topic will lead you to several articles written over the years about the negative environmental impacts of this practice, yet we continue, throwing out more and more every winter. The difference in the article I read today was the inclusion of some “out of the box” solutions to making roads more drive-able in foul winter weather. Think beet juice and asphalt that won’t ice up…I like where they are going with this. We have been salting roads for nearly 80 years! Now, we just need to push to have the status quo challenged and these or other innovative, less destructive practices put into the regular rotation.

The negative impacts of excessive sodium and/or chloride in the environment may not be news to some, but the impacts of these substances on roadways and structures was something I was not as aware of and is, in fact, a very expensive price to pay for continuing this practice. According to the New Hampshire Department of Environmental Services published information on the Environmental, Health, and Economic Impacts of Road Salt:

Chloride ions increase the conductivity of water and accelerate corrosion. Chloride can penetrate and deteriorate concrete on bridge decking and parking garage structures, and damage reinforcing rods, compromising structural integrity. It damages vehicle parts such as brake linings, frames, bumpers, and other areas of body corrosion. It impacts railroad crossing warning equipment and power line utilities by conducting electrical current leaks across the insulator that may lead to loss of current, shorting of transmission lines, and wooden pole fires. The cost of corrosion damage and corrosion protection practices for highways and the automobile industry have been reported to cost a staggering 16-19 billion dollars a year.5

If the environmental impacts are not as readily known to you, as to some, this article by the Smithsonian in 2017 does a good job of touching on the myriad of effects elevated levels of sodium and chloride can have in water bodies, on roadside vegetation, on land-based wildlife, and of course, on humans. Higher rates of collisions with moose who are attracted to the salt on the road; decreased size, fewer eggs produced, and reduced ability to avoid predation of trout; fewer female wood frogs surviving; reduced zooplakton survival rates (basis for entire ecosystems); and an increased in vulnerability of systems to be overtaken by invasive species are just some of the repercussions mentioned.

Several in-depth water quality studies have been conducted on this topic. The findings of the study depicted below show high concentrations of chloride in the majority of water bodies tested in more developed or urbanized watersheds, typically peaking in winter months. The values detected were often higher than allowable levels and considered toxic.

This is all something to think about as we deal with these snowy winter storms and see the brine being sprayed on roadways for our benefit. Is this a practice we want to continue despite the significant documented negative effects? Maybe we should support the efforts to find a more sustainable solution we can all live with. In moving forward on this topic, it is critical that decision makers take care not to swap out one collection of pollutants for another. The table presented in this article breaks down the pros and cons to various products that are currently used for de-icing. A quick visit to DOT websites of more northerly states shows that some of those responsible for keeping our roadways clear are willing to make adjustments in their approach, but cost cannot be the sole driver, as salt is cheap compared to other options. Changes should only be made if the choices we are given to improve this situation and reduce the use of salt and associated additives will be better in the long run for the roads, the structures, the creatures, the water they live in, and for us as well!